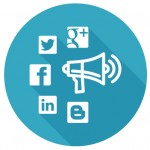 It’s all about how to utilize social networks as a marketing tool.

Chapter 1: The 6 Types of Social Media